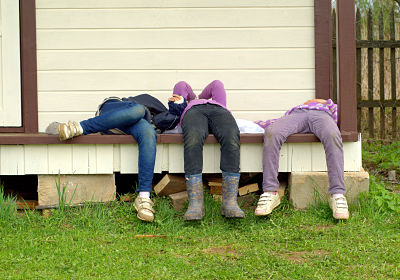 It took nearly my entire adult life, but I’ve finally become fashionable. Suddenly, it’s cool not to be career-focused.

I’m proud to say I was ahead of the curve when it comes to non-ambition. Oh, sure, growing up I had the usual variety of career-oriented dreams: archeologist, psychologist, midwife, pilot. But I vividly remember my response, senior year in college, when people would ask me what I planned to do: “Get some job. Any job. Come home at the end of the day and read.”

That would have been in the early 80s. In those days, it was highly unfashionable for a woman to be unambitious. You were supposed to be planning your career. Dressing for success. Gearing up to both bring home the bacon and fry it up in a pan.

Second wave feminism made it clear that women should settle for nothing less than a seat in the boardroom. And I was very much a second wave feminist. I was the sort who’d end a budding relationship if the guy tried to open a door for me. I did hope, ultimately, to find work that I was good at and could enjoy. Yet I didn’t give a damn about career “success.”

The result was that, after a decade or so of trying this and that, I stumbled into a subject that interested me (making work more humane), found I had a skill I could apply (communicating), and settled into what turned out to be a profession. At one point, stressed by having two young children at home, and tired of office politics, I decided to go it alone, and I’ve been self-employed ever since—though the kids are long-since grown.

Back then, when I set up my first office space in the corner of my bedroom, I quickly discovered what others are only now realizing for the first time. Working from home has its challenges, but it can also be incredibly liberating. Even during the times when I’m overloaded with work, going at it seven days a week, I can still wear flip flops, pause to pet the cat, move my work into the backyard on a warm spring day, and check out the mail the minute it arrives. On slower days, I can linger over the morning paper, fit in a few chores, or spend the morning at that art exhibit I’ve been wanting to see, minus the weekend crowds.

This freedom, for me, stems from a combination of being self-employed and working from home. It also stems from a trade-off I happily made: I had no interest in turning my small business into a massive enterprise. I enjoy my work, and have been lucky to make a living from it. But my career has never been the center of my life.

It took a pandemic, but suddenly my oh-so-unfashionable perspective is all around us. More than a year into an earthquake-sized disruption in how we work, people are resigning from their high-stress, career-oriented jobs—as well as their high-stress, dead-end jobs—in droves. A former NPR producer, who quit her Boston-based job last fall and moved back into her parents’ West Virginia home, recently published a piece in the New York Times about the “lying flat” movement in China, which asserts the “right to choose a slow lifestyle,” and its American counterpart, exemplified by this Tweet and its nearly 417,000 “likes” to date:

i do not want to have a career. i want to sit on the porch

We all know the result, decried daily in the news: a bizarre-seeming combination of record unemployment and record numbers of open jobs. Of course, the employment situation is about more than just people deciding the stress, constraints, pay, or single-minded focus on their work isn’t worth it. Continuing danger from COVID-19, a lack of child care, and geographic or industry-based mis-alignments between businesses who need employees and individuals looking for work all have a role to play.

But there can be no question that one result of the past year and a half’s upsets has been a new questioning about the role of work in many people’s lives. This, in turn, has led to more than just mass resignations. It’s led to companies taking seriously—and instituting–changes I’ve been advocating for years—changes that would have been laughed out of most executive suites just a few years ago: Four day work weeks. Full or part-time remote work. “Wellness week” company-wide shutdowns. Wage increases for hourly workers.

Nearly 100 years ago the economist John Maynard Keynes predicted that, thanks to technology, by around now we’d all be working 15 hours a week. Over the last decade, pundits have weighed in from all sides about why it hasn’t happened yet, but from what I can see most arguments boil down to this: we all want to get to the top, and we have built a model that says the more you work, the higher you rise. This despite the fact that research shows working longer hours not only doesn’t make us more productive—it often makes us less.

In researching this post, I came upon a telling etymological tidbit. The Latin word for business is “negotium,” which originally meant, “the nonexistence of leisure.” I certainly don’t think doing business means eclipsing all leisure. But I do think it’s a heartening and healthy sign that people are beginning to reject the concept of all work, all the time. And their employers are starting to listen.