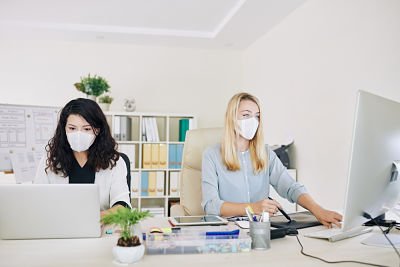 In late February, just before the U.S. began shutting down, I took on a new project: helping a client develop employee communications relating to their upcoming move to an open-plan office. Not surprisingly, that project soon ground to a halt. By early April, a different client had hired me to research how to prepare their offices (and employees) for the Big Return. I went from studying up on the pleasures and perils of sharing workspaces to immersing myself in a whole new cottage industry of manuals, white papers, and webinars addressing the dos and don’ts of sanitation and social distancing on the job.

The time is coming soon—if it hasn’t already—for a whole lot of office workers who’ve been working out of their dining rooms/bedrooms/kitchens/garages/basements to head back to the workplace. (Note I said “workplace,” not “work.” The “back to work” motif is galling, at least as it applies to all those people who haven’t been laid off or furloughed: they’ve been working the whole time, after all—only the venue has changed.)

Many of these workers are antsy to get back, even as they’re anxious about the dangers. Personally, I’m accustomed to working from home, and like it, but for many employees no amount of Zoom interaction can replace the casual camaraderie of office life. (Just ask my husband!) Which is why no matter how much warning they receive, the realities of life at the office in the latter half of 2020—and probably beyond—may come as a shock.

Employees will return to workplaces that are newly divided and separated, with one-way traffic rules and higher-walled, more distanced, cubicles. They may have staggered hours, they may have co-workers who remain working from home, they may be forbidden from travelling to meet with clients or partners. They will likely face temperature checks and checklists and extravagant rules around packed lunches and coffee breaks. The camaraderie they have missed will turn out to be nearly as virtual at the workplace as it was when they worked from home, as face-to-face conversation is discouraged or forbidden outright. (The investment firm Motley Fool has even considered developing a special hand sign employees can use when they feel a co-worker is “leaning in” a bit too much.)

How quickly the workplace traditions and amenities that have been touted (and mocked) among Silicon Valley hipster companies have turned into virus-spreading no-nos. Free food? On-site café? Gummy bear jar? Nope—pack your own, buddy. Morning huddle? Shudder! Hoteling/hot-desking? Not only are employees unlikely to be sharing the same desks, in many organizations they may not even share a space for hanging their coats. Open-plan offices? What used to be a discussion of how to dampen noise or be considerate when eating a fish-based lunch has given way to discussions of how far spit can travel.

Then there’s the serendipity of the old office-based life. Remember running into someone and stopping for a chat that turned out to yield the solution to the very question you’d been wrestling with, or sparked an idea about something you hadn’t even thought of? (Or at very least spoiled the episode of Game of Thrones you were counting on watching that same night?) Isn’t that why Marissa Mayer called all the remote workers back to Yahoo workplaces in 2013? Yes, many people reacted with outrage at her move, but even the most fervent devotees of telecommuting have generally supported the idea that spending at least part-time at the worksite has advantages for creativity and engagement. Yet if hours or even days at the office are staggered, desks planted 6 feet apart, large in-person meetings forbidden and in-office traffic suddenly one-way, will such spontaneous conversations even occur?

The bottom line question is, what will workplaces really be like without so many of the features that once defined them—and with the added stress of needing to be constantly on one’s guard? Will there be much point to braving the hazards of whatever it takes to commute, just to get to an office where people spend the day steering clear of each other? Whether or not our grand forced experiment in remote working will change the way people think about work in the future, one thing is clear: at least for now, life back at the office is going to be nothing like it’s been before.

Looking for help communicating with your employees during this time of transition? Why not let me give you a hand?