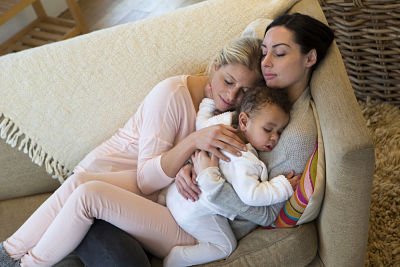 In 1992 I moved to New York, got married, and starting working in the media department (ok, as the media department) for Families and Work Institute. Families and Work, which recently folded, was a research institute, not an advocacy group, but at the time we were a small, passionate, unabashedly liberal staff. So I well remember the day in 1993 when we gathered in front of the conference room TV to witness President Bill Clinton signing something momentous into law: The Family and Medical Leave Act—FMLA.

FMLA, which requires any company with over 50 employees to provide unpaid, job-guaranteed leave for a variety of individual and family care reasons—including the arrival of a new child—was a huge step forward for the United States. Unlike every other developed (as defined by the U.N.) country  in the entire world, the U.S. had never mandated any kind of parental leave.

On the other hand, unlike the leave mandated by most of those other countries, FMLA remained inaccessible to huge number of employees, either because their employers were too small or because they couldn’t afford to take an unpaid leave. Still, it was a good start. “Next step, paid parental leave!” we told each other that first day.

Twenty-five years later, we are still waiting. Country after country has adopted paid maternity leave, at least (a healthy number also mandate paid paternity leave), until at this point the only other countries in the United Nations (whether “developed” or not) without a paid leave law are New Guinea, Suriname, and a few South Pacific islands. Among developed nations, the U.S. remains at the bottom of the heap.

The result is that a shameful number of men and women in the United States are on their own when it comes to figuring out how to manage the time off needed to give birth, adopt, foster, or bond with a new child. If they are lucky, their work might offer a decent amount of paid vacation. If they’re giving birth, they might be able to add in sick time and use short-term disability insurance—if their employer offers that and they’ve purchased it.

Employers to the Rescue?

Fortunately, here and there are signs of progress. A handful of states and even cities have taken matters into their own hands and instituted paid leave laws. And there are a lucky few whose employers provide paid parental leave; although they are still a decided minority, their numbers are growing. Stories about yet another employer who has added or expanded paid parental leave continue to pop up on a regular basis—most recently, it was Estee Lauder.  So while universal paid leave is still non-existent, the state of employer-sponsored leave provides a glimmer of hope.

“What’s the Deal with Parental Leave in America?,”  a report by Sam Vickars and Michael Hester, from a San Francisco-based agency called The Dataface, charts the current state of parental leave at about 1,500 employers in a pretty spectacularly high-tech fashion. (The data, which are crowdsourced, come from Fairygodboss.com.) Here’s an image from one chart in the report–go to the full report to play with interactive features that allow you to break down data by company, industry, etc:

What this Does and Doesn’t Tell Us

The gist of the data captured in this report is that most (but not all) of the 1,500 companies do offer some sort of paid leave, for mothers at least: the average is 8 weeks. Fewer companies offer paid paternity leave, with an average of 4.5 weeks.

Unfortunately (not the fault of the guys at The Dataface), the Fairygodboss data doesn’t include a lot of information that would have been helpful. For example, what about adoption leave? While many U.S. companies offer equal amounts of leave for dads and adopting parents of both sexes (childbearing moms almost always get more), it is by no means a standard practice. It would have been interesting to see how the companies in this chart stacked up on this front.

Another key item missing from the original data is how much leave is with full vs. partial pay. Yet another is which companies offer the same policy for all employees, and which offer differing policies among different employee groups. (For example, the authors of this report comment that among the companies represented in their data, legal services firms lead the pack for generous maternity leave. Yet in my experience many law firms offer one set of policies to the attorneys, and another, less generous one, to other staff.)

Nice as it is to know that many employers provide some form of paid parental leave, the report’s next section, a chart of federally-mandated parental leave laws in other countries, brings reality crashing back. It’s shocking to realize that even the complete outliers among U.S. companies, like Netflix and the Gates Foundation, each of which offer 52 weeks of paid leave to both fathers and mothers, are only offering what at least six other countries offer to all citizens. (At least when it comes to maternity leave. The rest of the world is less generous about paternity than maternity leave. Nonetheless, 27 of the 37 countries charted in this report do offer some paid paternity leave, and a number of others offer a “parental” leave to be taken later, which in many cases is open to dads.)

“Next step, paid leave” we told each other in 1992. Possibly. But “next steps” can take an awfully long time to occur. I just hope I live to see this one taken.

Trying for a corporate award? Slogging through an RFP? You can’t win if you can’t tell your story. Why not let me give you a hand?